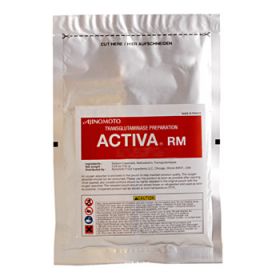 Available ONLY on SPECIAL ORDER!

Ajinomoto Transglutaminase Activa RM Also referred sometimes as meat glue this preparation has been used to dazzling effect by the like of Wylie Dufresne of WD-50 among others. Making spaghetti with fish meat and/or shrimps has been one of the most spectacular result obtained by Wylie. Activa RM is a powerful binding agent created to improve the texture of protein-rich foods and has been used by the industry for years. The surimi and ham we all know could not exist without transglutaminase. A little experiment and you will sandwich ham, turkey, and bacon in one piece. Activa RM restructures muscle foods such as red meat, poultry and seafood. This preparation also has uses in foods having lower protein content. Activa RM can be applied by dry sprinkle, or added as a dry powder during mixing. It can also be applied as a slurry when mixed with water.